HOW TO STOP MESSENGER SHARING YOUR LOCATION

The iOS and Android Facebook Messenger app sends a user’s location by default to message recipients.

iPhone and iPad users can open Settings then select Location Services to stop location data being used for Facebook Messenger.

Android users have to disable location in the Facebook Messenger app itself.

To do this they must tap on the Menu icon, select Settings, Location Services and untick the box that enables location sharing.

By taking either of these steps, it means users don’t have to remember to opt out of sharing their location every time they send a message.

MailOnline has asked Facebook whether it will decide to change the default setting in light of the Marauder’s Map.

The tool proved so popular it exceeded the API limits on Mr Khanna’s Mapbox account.

So Mr Khanna has shared the code for the map on a Github page so people with coding knowledge can get it working.

Testing his map on a group of distant Facebook friends who posted on chat at least once a day, Mr Khanna found that by looking at clusters of messages, he could see where one of them lived – even down to the location of his dorm room.

By looking at two weeks of chat data, he managed to work out the Stanford student’s weekly schedule, which means he could predict which building he would leave on campus at a certain time – information that could prove potentially dangerous in the wrong hands.

‘In fact I found that I could infer a schedule for almost everyone in this chat as well as the other active chats I am in,’ he wrote.

Mr Khanna found that he could even do this for people who he is not friends with on Facebook and could track the locations accurately from messages sent within a large group he was a member of, in order to organise poker games.

After chatting frequently to one friend, he even discovered that using the map, he could track his hourly movements so that at the end of the day, the map matched the location history collected by his phone. 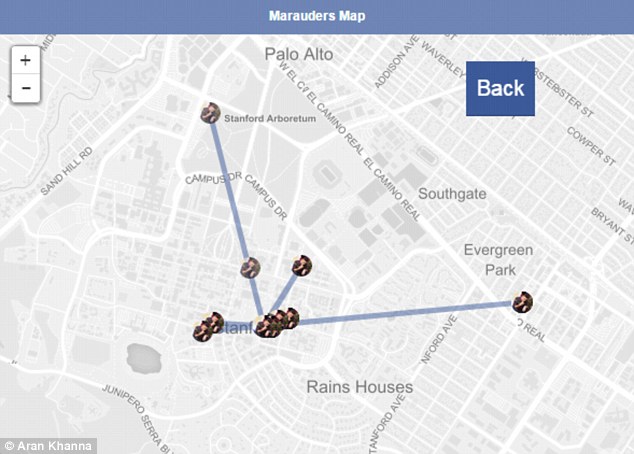 Facebooks Messenger’s app lets people send their location to friends and it defaults to sending a location with all messages
Pages: 1 2 3 4 5